Overview of the components for the monitoring

Here you see a coarse overview of the components to monitor hosts and services. 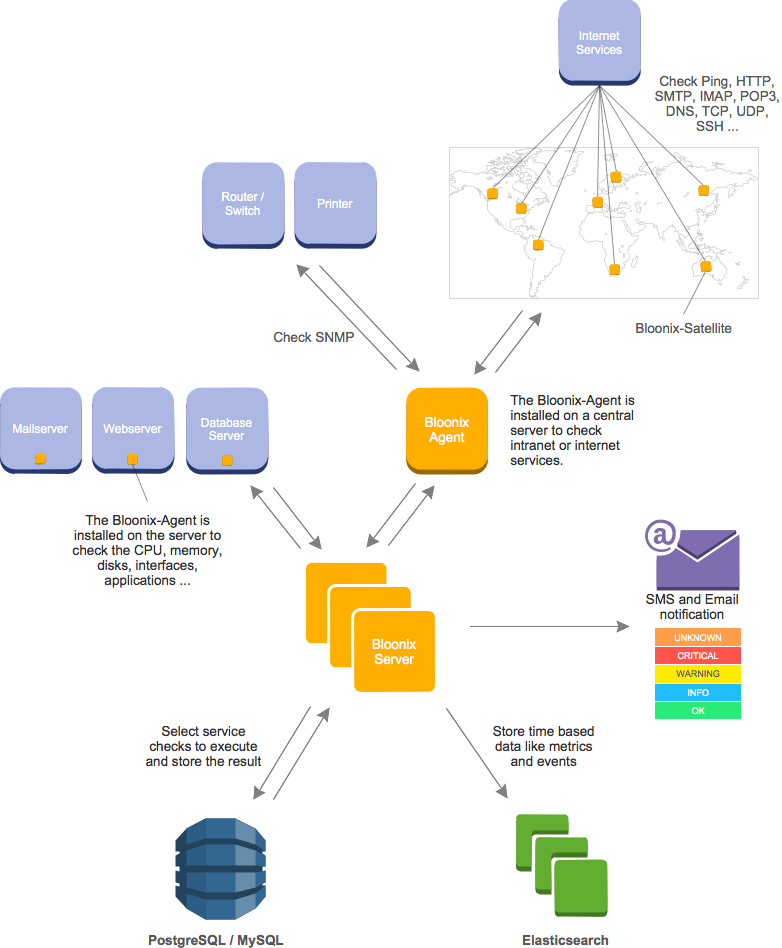 The components for the web interface

Over the web interface of Bloonix hosts and service as well as contacts and groups are configured.

The components in detail

Together with the Bloonix-Server the Bloonix-Service-Checker is installed, which is a part of the Bloonix-Server and monitors the actuality of the status of hosts and services. If, for example, the CPU utilisation of a host was not checked since several minutes any more, this can be due to the fact that a Bloonix-Agent has fallen out. In this case the service-checker would step in as a pseudo agent and deliver a critical status for the service.

Together with the Bloonix-Agent the Bloonix-Plugins are installed, which are smaller programms to check the status of one or several services and deliver at the same time statistical data to the service. A Plugin can be written in any computer language, it's only to be noted that the data exchange (program options and output of statistical data) occurs in the JSON format. The Plugins are installed together with the Bloonix-Agent.

The Bloonix-WebGUI is the user interface and runs on the client side as a JavaScript application in the browser. On the server side the webgui runs as a REST-API behind a reverse proxy (Nginx). The data format of the REST-API is JSON.

For the WebGUI a modern HTML5 browser is required. We recommend the use of Chrome, Safari, Firefox or also Opera. The Internet Explorer in version 11 should also work, nevertheless, this browser is supported in no version.

The database is used to store the configuration and the data by hosts, services, users and groups. Other database systems are not supported.

Elasticsearch is used to store metrics and events and all time based data. By the monitoring of several thousand hosts a high amount of data can arise. The choice fell on Elasticsearch, because Elasticsearch is highly scaleable and offers an easy cluster functionality.

Nginx is used as a reverse proxy and as a HTTPS offloader, because the Bloonix-Server and the Bloonix-WebGUI runs as a external FastCGI application. Nginx is avery fast and the configuration is very easy.

Workflow of the monitoring of hosts and services

Configuration of hosts and services in the web interface

In the web interface all hosts and service checks which you would like to monitor are configured. In the context of Bloonix a host can be a server, a virtual server, a router, a switch or also a printer. Every host owns a hostname and an IP address. If a host is configured in the web interface, a unique ID and password i generated for the host. Please note that the host password should not to be mistaken with the root password of the server. The host password is a special password which is required later for the Bloonix-Agent, so that the Bloonix-Agent is able to authenticate with the Bloonix-Server. In addition, service checks are configured, for example for the monitoring of the CPU utilisation, the memory consumption or the utilisation of the network interfaces.

Workflow of the monitoring

What the Bloonix Agent makes now is as follows:

Monitoring of services from multiple locations